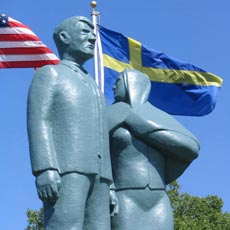 Välkommen till Lindström (Welcome to Lindström)!

Incorporated in 1894, Lindström, Minnesota was first settled by Daniel Lindstrom who left Sweden for America in 1853.  Among the Swedish Emigrants was Erik Norelius, whose personal journals (documented in part) formed the basis of Vilhelm Moberg's novels of the Swedish Emigration to America.  Moberg's fictional heroes, Karl-Oskar and Kristina Nilsson, are memorialized in statue at the west end of town as a tribute to the early Swedish immigrants whose descendants continue to populate our area.